the story of two Aboriginal ANZACs 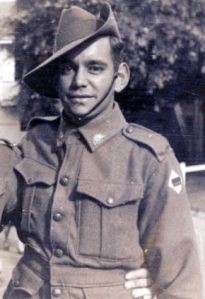 Today, as I reflect back on ANZAC Day, the 100th anniversary of the first major military action fought by Australian and New Zealand forces during the First World War, I remember all those who have fought for this beautiful country. This ANZAC Day I was lucky enough to hear the stories of two Aboriginal soldiers from my home state of Queensland. I would like to share their stories with you.

John Henry Huggins I, was the grandfather of my children’s beloved Prep teacher, Ngaire Jarro, and Jack was her dad.  Ngaire and her sister Dr Jackie Huggins AM FAHA, both of the Bidjara (Central Queensland) and Birri-Gubba Juru (North Queensland) peoples spoke at this very special ANZAC Assembly telling the children, Prep to Year 6, the story of their grandfather and father, and what it was like to be an Aboriginal soldier in these times.

As Jackie tells their story….

John was a stockman before he enlisted in 1916 at the age 30, in Bowen, Queensland.  John embarked on Ship HMAS Seang Choon A 49, on 4 May 1916 from Brisbane. John served a year overseas on the Western Front. He was injured and hospitalised twice in Belgium. On the second occasion, many of his Battalion were killed whilst he was recuperating in hospital.

The fact that John was able to enlist is unusual, it is reported that during World War 1 Aboriginal men were excluded from joining the military, nevertheless many Indigenous diggers evaded this by pretending to be Maori, Indian or Pacific Islander [1].  Jackie wonders if John played down his ‘Aboriginality’ to be able to enlist.

Despite this, it is estimated that at least 500 Aboriginal soldiers served in the 1st World War.  There are five known Aboriginal servicemen buried at Gallipoli. [2]

John survived WW1, and returned to Australia, and had one child with wife Fanny, son Jack, born in 1920.  They lived in Ayr, in North Queensland.

Jackie tells me that Jack was described as a “tall, handsome man, an excellent football player, a lifesaver, and the first Aboriginal man to work in the Ayr Post Office.”

Jack enlisted in Ayr, and was sent directly to Burma where he was caught, and taken as a prisoner of war on Burma/Thailand Railway.

He was one of almost 14,792 Australian servicemen and women captured by the Japanese with the fall of Singapore. Thankfully he was not in the one-third of them who would die in captivity. His workforce was assembled in Changi before being sent to slave on the railway. 9,500 Australians worked on the railway and nearly 7,000 survived to tell the story.

Jackie recalls the saddest moment of his life, when he arrived in Townsville after returning from the War. He was met by his best mate Loftus “Bluie” Dunne who retold the story to Jackie many years later “as Jack got off the train, weak and tired, he scanned around for his Mother and wondered why she had not written to him for a few months. Bluie then told him the tragic news; that she had died three months earlier. He naturally collapsed in Bluie’s arms.” Devastatingly John Henry Huggins I, Jack’s dad, had also passed away while he was serving his country.

Jack slotted back into life in Ayr reasonably well despite the deep sadness surrounding the death of both of his parents.

Jack met his future bride Rita (nee Holt) in Brisbane, and they were married in 1952.

Jack died in November 1958, aged only 38, due to injuries he received fighting in the Second World War, leaving wife Rita, a broken-hearted war widow, to raise their four children aged 4 months, 2, 3 and 8 years of age, alone.

“Both men were proud to serve their country and fight for their land at a time when they were not recognised as citizens of their own country.” says Jackie “they were not allowed to march in ANZAC Day parades or enter RSL clubs – these were only granted long after the Wars in 1967.”

Jackie describes “war times were bad times for Aboriginal people but things have changed. They were not eligible for returned servicemen land grants.”

“Despite all this the Diggers shared a great mateship and looked after each other all their lives” Jackie says. “They made our world a safer and better place to live and we all now enjoy many freedoms.”

I am grateful and very proud of our brave Australian men and women, both in Australia and further afield, past and present, whether in peace time or war. I will remember them. Lest we forget.

I love helping charities and not-for-profits. I am a fundraiser by day and a community do-gooder by night. I often get caught up in great charitable projects and fundraisers, of which I attempt to encourage (some call this spam) others to get involved - hence the name charityspam! My background is in corporate social responsibility and marketing, and I work as a fundraiser/consultant for Social Money Solutions www.socialmoney.com.au ENJOY! Please subscribe and help spread the word!
View all posts by charityspam →
This entry was posted in Community and tagged Aboriginal Soldiers, ANZAC, ANZAC Day, Birri-Gubba Juru, Dr Jackie Huggins, John Henry Huggins, Ngaire Jarro. Bookmark the permalink.